The new EasyConnect MSR snaps into the docking connector offering the mobility and productivity of a hand-held POS device, with the flexibility of a powerful PC. Now, as sales representatives use the tablet PCs to help customers identify solutions and place orders, they can also conduct secure 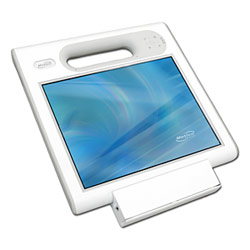 credit card transactions in real time, without the need to manage multiple devices. With the mobile broadband and wireless capabilities of the C5 and F5, secure transactions can happen whether retail employees are moving about a store or providing services and solutions in the field.

Bottom line first: The Latitude XT is a pretty good convertible tablet, with a good blend of features and a couple of outstanding options. It’s also expensive, but some of that expense can be justified by the build quality, which is sturdy, and by those options, namely the DLV screen and the 64 GB SSD (solid state disk). In addition, the N-trig DuoSense pen and touch digitizer works exactly as advertised and with a very pleasant, light touch. Is the XT right for you? Read on and make your own decision…

What was bought, and why: The configuration of my XT is as follows:

As a dedicated “slate person,” I approached this purchase with some reluctance. After standing on the sidelines for well over a year, watching slates languish while the OEM’s rolled out new convertible after new convertible, I simply got fed up. Motion’s decision to cancel the LE1700WT, one of only two interesting new slate designs, was the last straw. I briefly considered the TabletKiosk i440D, but in the end I simply wanted to try the N-trig digitizer. The N-trig design approach appealed to me, especially the “light touch” required for passive (touch) operation; other touch screen designs had disappointed me with the amount of touch pressure that they required.

Once the philosophical decision to consider a convertible had been made, it was easy to dive in with both feet… in for a penny, in for a pound, as they say. I decided to upgrade to a really bright screen to help mitigate ambient light and outdoor visibility issues, an SSD to see if all the hype was real and Vista Ultimate because if I was going to spend all this money, I wasn’t about to scrimp on the OS! And since the thing was going to cost so much, it only made sense to me to buy the ProSupport Service; not that I expected any trouble, but our family has owned many Dell computers and we’ve always been pleased with the service / support plans.

A couple of other comments about the Dell “purchase experience.” First of all, I’m going to say that my experience with Dell Sales Support, Customer Service and Tech Support (3 different services) has been nothing short of superb. I really mean that! To date, I have no reason to fault any of these operations.

But that doesn’t mean that an odd thing or two didn’t happen along the way. When I tried to initially place my order over the Internet, I discovered that Dell’s order system was malfunctioning; I could configure an order but it wouldn’t let me actually place it. So I called Sales Support, where I discovered that the order system wouldn’t accept an order if only 1 GB of RAM was requested. Since 2 extra GB of RAM (1 GB basic + 2 GB expansion RAM = 3 GB) was ~$400, I had decided to order and install 2 GB of Crucial RAM, which cost all of $55! But the order system wouldn’t budge; I had to order an extra GB of RAM (1 GB basic + 1 GB expansion RAM = 2 GB) just so the system would accept the order. Sales Support agreed to place the order with the understanding that I could return the extra GB of RAM for credit once I received my XT.

Note that I also ordered all the recovery media and documentation with my XT. Dell …

The power to make the paperless real estate transaction a reality is in the hands of real estate brokers, agents and county recorders, according to panelists in an Inman News audio conference on the subject Wednesday.

“On the front end, in terms of the real estate side, there is no barrier to entry. It’s legal, it’s valid, it’s being practiced today,” said Dan Tealdi, chief executive officer of Criterion’s REDTablet, a tablet PC company. “We need to see county recorders adopt technology on the title side.”

Asked if there is actual demand on the part of buyers and sellers for the paperless transaction, Lorenzini gave a qualified “yes.”

“You’re talking about millions of transactions going on. Only a fraction of those are demanding it, but a fraction of millions is still a large number,” DocuSign’s CEO said. “Mortgage brokers, agents all believe this is inevitable. A year or two or three from now everyone’s going to be signing electronically.”

Seattle-based DocuSign’s product makes it possible for a buyer or seller to sign documents using only a PC, without additional hardware such as a stylus, from any location. REDTablet, owned by San Bruno, Calif.-based Criterion, makes tablet PCs that can capture a signature done with a stylus and apply that signature electronically to documents in a transaction.”…