48 Hours. 48 hours; it seems like it should be a lot of time. But, ironically, when you’re feeding your new tablet craving, 48 hours is barely any time at all!

A few months ago, I contacted Allegiance Technology Partners ( www.alltp.com ) and signed up for a 48-Hour demo of the new TabletKiosk Sahara i440D Dual Touch slate PC. The wait turned out to be a bit longer than I expected, but last week, the long-hoped-for e-mail arrived! The i440D would be delivered just after the 4th of July, on its way back to Pennsylvania after having been unboxed (on video no less) by Rob Bushway at GBM. I could short-stop it for 48 hours and then had to turn it loose so that it could continue back to its new home at Allegiance in Horsham, PA.

The 440 arrived a tad ahead of schedule (bless you, FedEx!) and because Rob did such a good job in his unboxing video ( http://tinyurl.com/3cxjtr ), I’ll spend only a few sentences describing the contents of the box. Of course, it contained the i440D, packed in a nice anti-static plastic bag, a soft padded sleeve (case) with the TabletKiosk logo and an accessory box. The accessory box contained the battery (~35 W/Hr if memory serves), the AC adaptor and 3-wire AC cord, a large (12″) and very nice blue microfiber cleaning cloth, a somewhat sketchy color brochure which points out all the i440D features, and a stand. The stand turns out to be very, very special!

Of course, the star of this show is the i440D itself. This unit featured a 1.83 GHz L2500 Core Duo, with 1GB of RAM and an 80 GB hard drive. Compared to the prototype that I saw in late February, the production unit has turned out to be very handsome and incorporates some interesting changes. The bezel or frame is a pearlescent white, against which the TK logo contrasts nicely. It is very attractive, but I think my own preferences still run to the non-slip black case finish, but that’s just me. 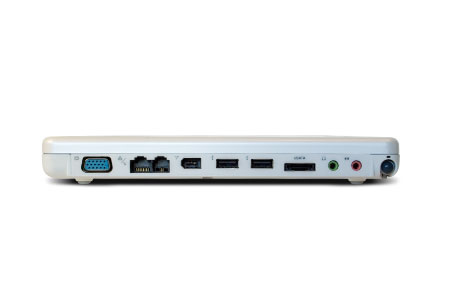 The screen is still integrated into the bezel with a very shallow ledge or step. The surface of the screen is, of course, the touch overlay. Maybe it’s just faulty memory on my part, but this screen / touch surface felt firmer and more rigid to me than the prototype. (Note: In a recent posting, TK says that the touch overlay has a glass, not plastic, surface.) In direct light, it appeared to be finished with a very fine matte finish which was not very reflective at all. It felt like a perfectly satisfactory writing surface.

Of course, all the LEDs, switches, buttons, speakers, mics and fingerprint readers that we’ve all seen in press-release photos were there, along with an exceptional assortment of ports which included PCMCIA, monitor, Ethernet, modem, full-sized FireWire, two USB 2 ports, headphone, external mic and an e-SATA port! Curiously, there was no dummy insert in the PCMCIA port, making for a relatively large ‘hole’ in the side of the case. It turns out that its a missing accessory; when this particular slate shipped, the inserts had not yet arrived. TK says that all future units will sport a proper insert.

If you read my previous review ( http://tinyurl.com/yusp6w ), you will remember that I was somewhat critical of the i440D case shape; I thought it a bit boxy. Well, for whatever the reason, the

production unit looks sleeker and a bit less boxy. One reason for this is that the back of the case has been significantly re-engineered! The stubby, “table leg” rubber feet that I complained about are gone, replaced by lower rubber buttons that don’t spoil the clean lines of the back. It’s a significant cosmetic improvement, but the back of the slate probably gets hotter than it used to as a consequence.

Anyone else notice that the Tablet PC has become sort of invisible lately? Hardly any new ones were announced at the big ol’ Consumer Electronics Show a few weeks ago (Bill Gates didn’t even hardly mention it during his big keynote there), sales have been mad sluggish (all 1.3% of all PCs sold are Tablet PCs, and it doesn’t help that they almost always cost more than a comparably-equipped laptop), and it’s almost like Microsoft has just lost interest in the whole thing. Well, maybe not entirely. It might not seem like they’re pushing the Tablet PC platform very hard, but PC World has an article about how Microsoft is working with Toshiba, ViewSonic, and AveraTec (i.e. spending some marketing dollars) to get more budget Tablet PC on the market. Everyone seems to think that the problem is poor marketing—that Microsoft et al. have done a poor job explaining what a Tablet PC is and what makes it different than a regular laptop—but maybe it’s time to admit that beyond a few niche markets, there just aren’t that many people who want to write by hand any more. Nothing wrong with that.”

Robert Scoble, a Micorosoft employee and Tablet PC evangelist, agrees about the marketing problem on his blog:

“But, Engadget is right. Microsoft is BLOWING it big time by not making the Tablet PC a bigger deal.

Most normal people haven’t seen a Tablet PC yet. How do I know that? Because everytime I’m on a plane people want to play with it. Same thing at the conference. People wanted a look.

That tells me that we’re leaving money on the table. Howso? Tell me, have you seen an advertisement on TV for the Tablet PC?

Let’s go over this again. Why does Apple have a marketing budget to buy TV ad spots and billboard space and magazine space for the iPod but my company can’t buy a Super Bowl commercial to show it off to normal people?”

Steve Rubel, WebProNews.com, also picked up on it:

“The solution here is, as you said, to show as many non-geek businesspeople as possible the power of the Tablet PC. Once folks lay eyes on it, they will be mesmerized (unless they already love Apple). I know I was. Unfortunately, we’re standardized on Dell here, but if they ever come out with a Tablet PC I would be game.

What Microsoft needs to do here, Robert, is find non-geek influencers who will frequently evangelize the platform to others both offline and online. Microsoft should immediately identify 500 – 1000 influential business bloggers who are big thinkers and give them free Tablet PCs systems to use.

Pick folks who travel, speak, write and appear in the press frequently – e.g. people from outside the technology community. Pick leaders who others flock to for advice. Scoble, please stop reading here and get David Allen, Pat Croce, Mark Cuban and Tom Peters Tablet PC systems ASAP. Do not pass go. They should be at the top of your list. “…